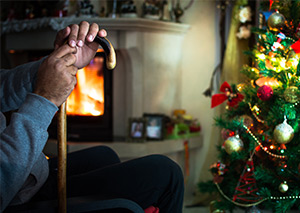 The research has also led to Age UK estimating that there are, in fact, a lot more people who aren’t looking forward to the festivities, estimating over three million older people view the holidays with trepidation. This is largely because it brings back too many memories of happier times and loved ones who are no longer with them.

In a bid to help tackle the growing sense of loneliness older people feel at Christmas time, Age UK has launched a campaign entitled, ‘No one should have no one to turn to.’ The aim of the campaign is to raise awareness among the public and to encourage them to reach out to older people in their lives and their community. It promotes its brilliant befriending service, which pairs volunteers with an older person to pay them visits at their home or take them out and about for a social activity.

Chocolate giant Cadbury’s are also helping to promote the campaign by ‘donating their words’. This will see the chocolatiers remove all wording from the front of the packing on selected bars of Dairy Milk and donating 30p to the cause from each one sold. They have also been in to take over some of Age UK’s charity shops and swapped price tags for suggestions of how you can help someone who is lonely. This includes simple actions such as talking to someone at the bus stop or checkout, to larger acts like calling an older relative and volunteering to be an Age UK friend.

Why combatting loneliness is important

Loneliness is a growing problem in the UK, particularly for those in later life, and can have a serious impact on people’s wellbeing and quality of life. It’s a serious condition that, when left untreated, can lead to several serious physical and mental health problems. For example, loneliness is associated with such conditions as depression, impaired cognitive health, heart problems, stress and anxiety and insomnia. As the UK has an ageing population, it’s believed the loneliness epidemic is only going to get worse which means even greater strain on our public health services and charities.

Among the most highly regarded care homes in Dorset, Primrose Lodge Southbourne offers expert care and support to older people so that they can maintain an independent, happy and healthy lifestyle surrounded by friends and trained carers. To learn more about what we do, please don’t hesitate to get in touch with our friendly team today on 01202 429514.

In the first instance we welcome your phone call on 01202 429514 or if you prefer, please leave us a message below.

Copyright 2021. A member of the Affinity Care Group.